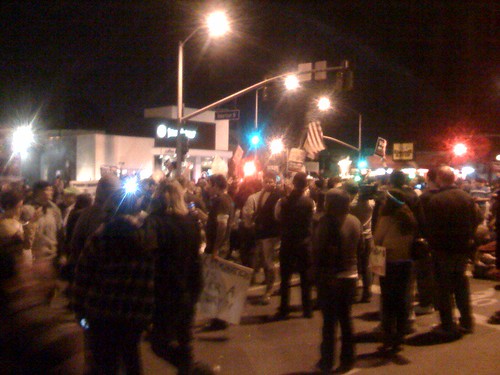 At the end of the day, I guess we didn't do much. We shutdown streets... lots of streets.

We marched and shutdown miles of traffic on Sunset Blvd and Santa Monica Blvd.... major intersections. We owned them. They were ours. Cars couldn't traverse. There were disruptions for sure. We marched, but we need to do more. Tactical alerts are crap.

Some of my friends thought we went too far, but quite frankly I think we didn't go nearly far enough... we did nothing.

When I woke up yesterday morning, the mayor of West Hollywood had sent out a notice announcing the protest. Before leaving for work, I searched Facebook. I didn't see any mention of it so I quickly copy pasted the email into a new event and sent it to 100 or so of my friends who were local to help get the word out. The whole day I felt anxious, not sure what to do. In just a few hours, the invite list had risen to 8,800, with over 1,000 people confirming! It was crazy. This was just on the event I made. I placed an ad for the protest and targeted gays in Los Angeles and Weho. It just made me feel a little less helpless doing something.

At the rally, I saw a lot of really angry, pissed off people. As odd as it is to say, it helped. It helped me realize I wasn't the only one feeling this rage pent up inside from this feeling of betrayal by our fellow Californians. Couples were visibly stung and hurting, but there was some comedic relief (my favorite sign was "I can see discrimination from my house.")

The rally itself ended up not being the high point for me though. It was afterward, when the crowd broke out of the cordoned off area that was more envigorating. It was then you realized how large a crowd we were.

We shutdown traffic on Santa Monica Blvd and then flooded the Sunset Strip with a massive sea of thousands of people. The crowd shutdown down all east-bound traffic on Sunset Blvd (and much of the west-bound traffic as well). It was heartening to see the support from others standing on the side of the street, flashing peace signs from cars, despite the fact, we were directly responsible for them being stuck where they were. They understood why were there.

No matter which direction you looked, you couldn't see and end to the massive crowd. As we marched, more people joined in. Traffic was honking in support as we walked along side them in the opposite lane. It was so freaking awesome to see and be a part of. I've never seen so many people—gay, straight, bi, married, single—all united in solidarity behind equality. One of my straight, female coworkers emailed me to tell me she wasn't getting married until all of her friends could. It was all really fucking amazing.

I have to also say I was really impressed with the way the West Hollywood Sheriff's Office handled things. As we marched, they tried to shutdown traffic around where we were marching and anticipate where we were going. They seemed respectful of what we were doing. We broke off in groups. We marched from Sunset to Fairfax and then back again. Others went west into Beverly Hills, while others continued east all the way to Hollywood and Highland. Bus after bus switched its sign to "Not In Service" and sat on the side of the road.

This morning, I decided I should skip today's rally at the Mormon Compound though. This election cycle has been so really intense, and I just need to decompress a little bit (plus I was concerned I might accidentally light the place on fire).

I don't think the Mormon Church realizes what it started here. They've ignited support and a resolve in this community I've not seen, and they've brought us together. They didn't want their children to learn about gays? Well, I think to that end they will find they failed. I don't think we'll be out of their faces for a long, long time to come.

They've hurt our community. They've hurt my friends—deliberately, wantonly. But in the end, I think will have ended up hurting themselves more. Time and righteousness are on our side.

But last night felt good. It was really amazing to be part of it. 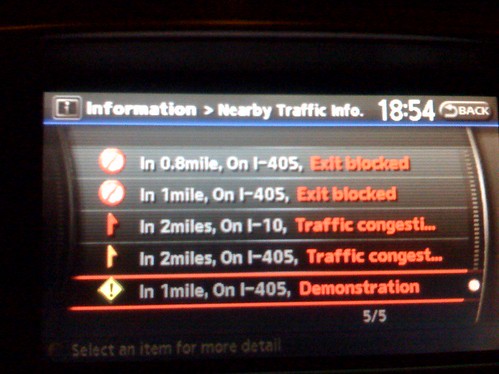 This time from the other side. ....I guess if it gets too bad I can
jump out with a sign.

Originally uploaded from my mobile by davidology.
Collapse