Last night and this morning stung. I never really thought my fellow Californians would vote for hate, but in the end, a lot of them probably had a hard time going against the will of their respective churches.

As much as these people acted as bigots, I'm slowly realizing that many Californians simply don't hate gays. Sure, it's a part of that vote, but it's not 52%. That's simply not who we are. The bigots have somehow found a home with the church, and we've unfortunately found ourselves countering years worth of rhetoric from the clergy and other leaders.

The past 8+ years, they've heard the politics of prejudice and hate preached by the likes of Karl Rove through the very leader of our country. Decent and good people have had that message bolstered by a Republican convention full of rabid fundamentalists willing to go to any length to make us the feared and hated target of their culture war, regardless of the cost to us. They wasted millions of dollars to do nothing but attack us.

I think I'd gotten somewhat complacent in my little bubble here in Southern California, and that's what makes this sting more to us, I think. We've had our very foundations rattled, in a place where we've felt safe to be ourselves, where we felt not just tolerated, but respected. The battle isn't just being waged here though. This whole event has made me realize how critically, critically important it is we take up this fight at all levels.

I do have some hope that with Obama, the Republicans will no longer have the White House from which to spew its messages of intolerance.

To the leaders of the Catholic and Mormon Churches, however, I kind of hope there is a hell. I'd love to see you judged by your actions this election. You spent millions of dollars that could have helped people to hurt people. If there is true evil in the world, you exemplified it with your bold-faced lies, your fear tactics, and your abhorrent bigotry. You've masterfully shown to the world why the separation of church and state must, must be maintained.

In every country and in every age, the priest has been hostile to liberty. He is always in alliance with the despot, abetting his abuses in return for protection to his own.
-Thomas Jefferson, 1814 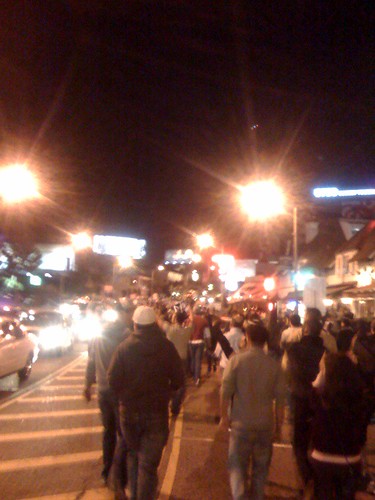 Originally uploaded from my mobile by davidology.
Shutting down traffic on Sunset. 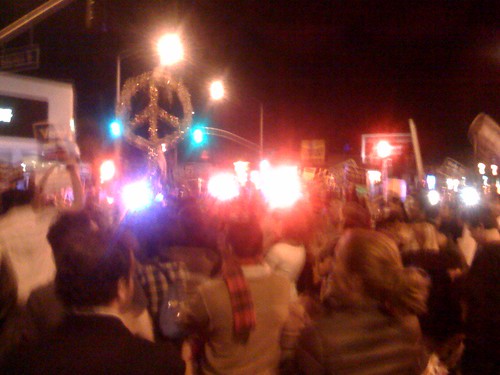