I've never been this anxious about an election before—even when Prop 22 passed, I wasn't this affected.

The sad part is, regardless of how this goes down tonight, at least near half of our state will have supported discrimination, and that's disappointing. I hope we show the country we're not about that today. 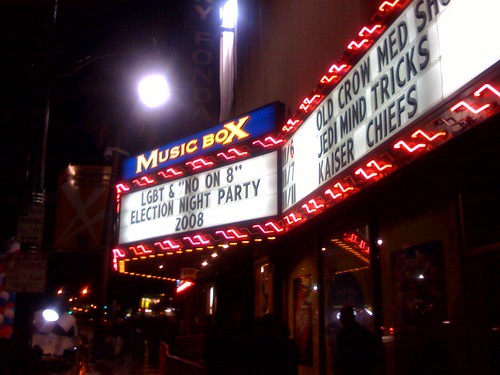 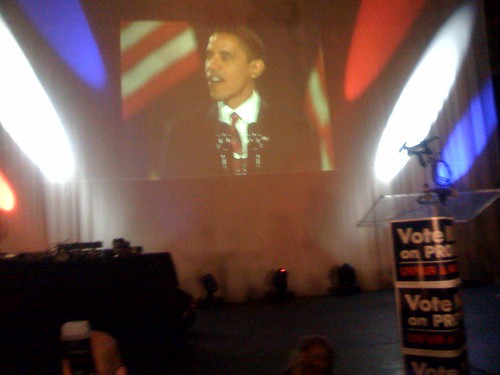 Originally uploaded from my mobile by davidology.
Wow amazing. So happy

I cheered. We all cheered as McCain conceded defeat.

It was a truly a surreal moment, however, at the Henry Fonda Theater when they introduced Obama as the next POTUS. I actually teared up as I watched and listened to our new President.

It was amazing. It was truly, truly amazing. In all of the elections in which I've participated, I've never been so ecstatic, so moved, and so inspired. He's a great orator. In the end though, the real victory is that his election is symbolic of and sends the message of a course change that is so woefully needed by this country.

After his speech though, my friend informed of Prop 8's status, which was just depressing. I remember how surprised I was when Prop 22 passed, but this is years later. Little has apparently changed. The fact is, I live in a state that right now cares more about the rights of chickens (prop 2) than it does of its own citizens.

I know the fight isn't over, but I'm drained. Why do I have to feel as if I need to fight for my rights every, single election?

I guess I should be happy our country took a new direction tonight. I'm really disappointed in my state right now though.

I always thought we were different. I spoke to a friend in the south who reminded me that we still have it much better off than they do. It still stings though. In some ways, to be honest, I think it stings more. I didn't realize so many in my own state felt the way they do.

Here's to Hope. For tonight, though, I'm going to take my Ambien and go to sleep before the Prop 8 bigots announce their temporary victory. Our fight continues tomorrow...