So my weekend began on Thursday night when I went to see Hillary ("Hilldawg") Clinton at the Abbey. I've still not made up my mind for whom I'll vote, but I went nonetheless. When the first woman who may very well be a contender for the Presidency comes a couple blocks from your pad, you go.

I wish I could as enthusiastic about a candidate as some of the attendees were, but I'm just not there yet. I'm not a "Hillstar" (that's what apparently they call themselves).

Nonetheless, it was a very nice event. Hillary spoke very well and convincingly. She wouldn't come out and endorse gay marriage, but made it relatively clear if you were reading between the lines that it wasn't because she didn't think gay marriage shouldn't be legal, but that it was a process, and civil unions were a necessary step in that direction. It's not the answer the idealist in me wanted to hear, but it's perhaps an honest one (or at least a politically expedient one).

She talked about a lot of things, most of which I'm sure you can read in a bajillion places so I'll skip it and leave you with a link to my Flickr set of that night. 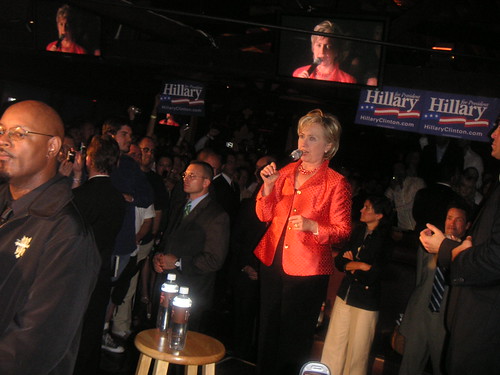